After Talking to Firefighters, a Startup Created a Tool That Maps Every California Tree to Help Predict Fire Spread

By Andy Corbley Via The Good News Network

"A new state of the art satellite imaging program will allow California fire authorities to map every individual tree in the state as a means to better plan and monitor for fires.

The catastrophic fires typifying the last few fire seasons in California’s forests have had scientists brainstorming new and better ways to combat them, and one effort from the startup Salo Sciences, called the California Forest Observatory (CFO), uses satellites and AI to create a map covered in small green points.

Each of these points represents a real tree, which together represents one of the most ultra-detailed satellite pictures of the earth’s surface available. This will allow wildfire authorities to predict and plan where fires are starting, where they might be headed, and how damaging they might become using information like wind speed and direction, canopy height, and ground vegetation cover.

The CFO creates these pictures from a string of 100 bread-loaf-sized satellite cameras managed by a private company formed by NASA scientists called Planet.
Spinning in a line around the earth, they act in unison like a barcode scanner of our planet’s surface, taking images at about three meters per pixel, an order of magnitude higher than those taken from larger, older satellites.
The satellites are then aided by lidar, a laser technology that gathers information, mounted on a plane, before both streams of data are fed into a deep-learning algorithm which determines things like tree height.
David Marvin, co-founder and CEO of Salo Sciences notes there is nothing on Earth like it, and traditional use of lidar—mounted on a low-flying aircraft, is a very slow and expensive process." 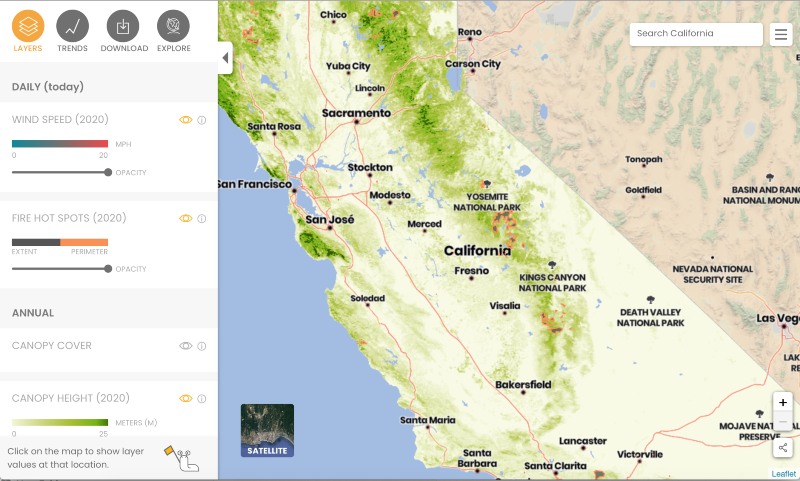 A trip to Sequoia National Park teaches you that California’s forests evolved to regularly catch fire, and that some trees—like the sequoia—actually need fire to remain healthy.

The reality is that the California fire authorities became so good at quickly extinguishing brush fires that over time, the smaller vegetation growing between the trees that would normally burn fast and at low temperatures, began to grow larger and live on.

As climate change has made California summers hotter and drier, the fires that now race through these masses of small vegetation can damage even the trees that have evolved to protect themselves from fire.

'If these fires didn’t have continuously dense fuels to burn, it would be much more difficult for them to get out of control,' says David Martin to Fast Company.

'So this is what we first saw was a major problem. What we wanted to tackle was, how do we get at identifying the areas to begin treating and removing these overgrown forests?”

With the CFO being updated at the end of every fire season, sometimes even more often, these little tinderboxes will be found much sooner, preventing a simple brushfire from turning into a raging inferno.